Are you SAD? How to Deal With Seasonal Affective Disorder

Get the latest CCU news delivered right to your inbox. 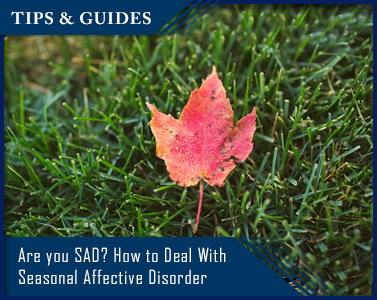 The way I see it, if you want the rainbow, you gotta put up with the rain. — Dolly Parton

When you see the first leaf of fall turning to orange and red do you cringe or do you celebrate? For those who cringe, the seasons changing can mean depression, the blues, weight gain, or mood imbalance. For those people may be suffering from Seasonal Affective Disorder or SAD.

The condition known as Seasonal Affective Disorder (SAD) is a form of depression that sets in during the fall and winter, and typically lifts by spring. It affects about half a million people in the U.S., according to the Cleveland Clinic, while 10 percent or more of the population may experience a milder form of seasonal blues. The incidence of SAD is higher in northern states and in areas where the weather is often cloudy.

SAD is far more common in women than in men, with women making up about three-quarters of the cases, although the Mayo Clinic notes that men may suffer more severe symptoms. It often seems to run in families.

In addition to depressive feelings, people with the condition may experience carbohydrate cravings that lead to weight gain; one study found a high rate of binge-eating in women suffering from SAD.

SAD is triggered by a lack of sunlight, although why some people are affected this way is still a mystery. One theory is that without adequate sunlight, a person's internal biological clock loses its bearings and its ability to regulate mood and sleep. Another possible explanation is that sunlight stimulates chemicals in the brain such as serotonin, a neurotransmitter believed to help maintain mood balance.

How to Handle SAD

If you relate to this common condition, have it yourself, or know someone who does, what can be done to prevent or at least mitigate what can often be a disabling condition? Some treatments include light therapy and medication.

The current standard treatment for SAD is to replace missing light signals through light therapy -- soaking up artificial sunlight for anywhere from 15 minutes to an hour or more each day. Many patients do therapy at home with fluorescent light boxes that can be purchased online. But doctors warn that before you go out and buy a light therapy unit, if you think you are suffering from depression, you should be under a physician's care… The National Alliance on Mental Illness notes that in addition to light therapy, some patients with SAD also benefit from cognitive behavior therapy, which has proven effective for other types of depression.

In addition, Steven Schlozman, who possesses an M.D. in medication, from Psychology Today notes:

Medications have been helpful for many, and given the association with serotonin and norepinephrine, medicines that increase these neurotransmitters are recommended. Check with your doctor about whether this is a good option for you.

Absorb Real Sunlight. Our bodies create vitamin D when exposed to sunlight. During the winter, our bodies may not be getting enough vitamin D and low levels of the vitamin correlates to many diseases including depression. To get your fill of vitamin D, “During the months of November through March, … you might have to rearrange your schedule to get as much sunlight as possible. If you can manage to sneak away for even 10 or 15 minutes at lunchtime to get outside and soak in as many rays as possible, you’ll get a decent-enough sunshine fix. Or put on your coat and gloves and brave the cold during the weekend for a nice long walk at noon…The New York Times best-selling author Joseph Mercola, DO, includes an interesting vitamin D-UV calculator in his piece, How Much Sunshine Does It Take To Make Vitamin D? Using the calculator, you can figure out the amount of sun you need to meet your vitamin D requirements. As Dr. Mercola explains, it varies hugely depending on your skin type and location, as well as on the time of year, time of day, and atmospheric conditions.”

Take a Vitamin D Supplement. “It’s a very good idea to take a vitamin D supplement during the winter months, especially if you can’t plant yourself and your laptop in the Caribbean for 120 days until we ‘spring forward.’ So many diseases are correlated with low vitamin D levels, especially depression. Even if you’re not feeling low, I would absolutely have your levels checked, which your primary care physician can do. The National Institutes of Health's recommended dietary allowance for vitamin D is 600 IUs a day. But Mercola suggests that adults take as much as 5,000 IUs per day (I take 3,000 IUs in a liquid). Your doctor can help you determine the best amount of vitamin D to take, if you need it. Certain foods are good sources of vitamin D, including cod liver oil, swordfish, salmon, tuna, milk, yogurt, sardines, eggs, and cereals fortified with vitamin D.”

Get Some Exercise. “Although we've known for decades that exercise can decrease depression symptoms, a study published in February 2016 in the Journal of Neuroscience found that exercise increased the levels of the neurotransmitters glutamate and GABA, both of which are depleted in the brains of people with depression and anxiety. The researchers found that aerobic exercise activates the metabolic pathways that replenish these neurotransmitters, allowing the brain to better communicate with the body. In a recent Time magazine cover story on the science of exercise, Mandy Oaklander writes, ‘If there were a drug that could do for human health everything that exercise can, it would likely be the most valuable pharmaceutical ever developed.’”

Eat Mood-Boosting Foods. “Even though the lack of light is working against us, Mother Nature did provide us with plenty of foods and spices during the fall and winter months that protect our mental health. Among fall’s mood-boosting treasures are:

Looking at the Bigger Picture

It is comforting to realize that seasons come and go. Looking at the bigger picture, realize that seasons change. There can be snow on the ground today and by tomorrow the sun is out and the snow melts away. As Dolly Parton points out in the quote above, first the rain, then the rainbow. While you wait for spring to arrive, give yourself a little TLC. Munch some pumpkin seeds, take a nice long walk, and get some sunshine. Think of the changes in seasons as a reminder to take good care of yourself.

What do you think?

Do you have a question, comment or an idea for an article? Email: [email protected]

Why a Marketing Certificate is a Great Investment in Your Future!

Top Tips for Completing an Online College Bachelor's Degree
Are you worried about what to expect from an online college bachelor's degree? Read on and learn how to succeed in online college with these tips.
Read More
Ace the Test: Our Mega Roundup of Study Tips for College
Retain more knowledge and ace your tests by learning and applying these study tips for college! Here are our best insights to study effectively.
Read More
6 Incredible Advantages of Online Degree Programs
In these uncertain times, online degree programs can offer many amazing benefits to students pursuing their passion. These are the benefits of studying…
Read More
SEE ALL FEATURED ARTICLES   ⟶
Browse By Category 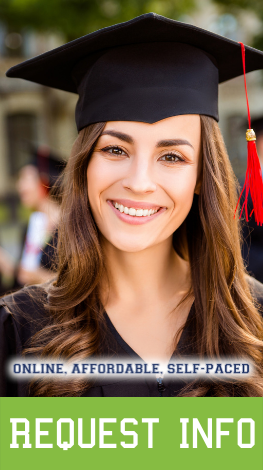 It’s a New Year — Resolve to be Happy!

Tell Us About You!
Browse By Tag
TOP